The Freight Hoppers are a rollicking old time string band formed in 1992. Their repertoire includes music that was first recorded in the late 1920s and early 1930s, and spans geographically from Mississippi to West Virginia. Its members include fiddle and banjo players David Bass and Frank Lee, with Allie Lee on guitar and vocals and Amanda Jean Kowalski on string bass. Based in the Smoky Mountains of North Carolina, The Freight Hoppers draw from rural southern music for their inspiration. One memorable high point in the band’s history was appearing on Garrison Keillor’s nationally syndicated radio show A Prairie Home Companion on National Public Radio in 1996, winning second place in the show’s Talent from Towns Under 2000 contest representing Bryson City, NC.

For more information on The Freight Hoppers, visit:

Frank and Allie Lee of Bryson City, North Carolina, are a harmony-powered old-time duo. Their April 2018 release —Roll On, Clouds — showcases their favorite songs from years of performing together. These pieces range from blues tradition (“Somebody On Your Bond,” “Roll and Tumble”) to bluegrass classics (“Standing on a Mountain,” “Cabin on a Hill”), yet remain rooted in the old time aesthetic. Frank’s nylon string fretless banjo is the dominant instrument, with guitar, slide guitar, and Allie’s banjo and harmonica adding to the musical texture.

Before meeting, Frank and Allie each traveled extensively as touring musicians. Frank, a founding member of The Freight Hoppers, has impressed audiences all over the United States, Canada, and northern Europe with his signature clawhammer sound. Allie is a founding member of The Whipstitch Sallies, a band from Indiana that toured in the Midwest, North Carolina, Colorado, and Hawaii. Together, the pair is a powerhouse duo with appearances planned across the country, and sharing their knowledge and experience with students of all ages at old-time music camps,

In addition to performing, Frank and Allie screen print music-themed t-shirts, available on their website. They also organize an old time music retreat in the Great Smoky Mountains in the spring called the Banjo-Fiddle Frolic.

Frank & Allie Lee’s CDs are available on their website, as well as CD Baby, iTunes and Spotify.

For more information on Frank and Allie, visit:

David Bass is one of those rare musicians who can play the fiddle and do flatfoot dancing at the same time, and do both well. A legend in his own right among today’s young old-time fiddlers, Bass has had a lot to do with oldtime music’s steadily ascending popularity with young music listeners around the country.

Bass won first place in old-time fiddle at the Mt. Airy Fiddlers’ Convention in 1997 and again in 2006. With Bass on fiddle, the Freight Hoppers won first place in the traditional band competition at the Appalachian String Band Festival at Clifftop, West Virginia, in 1996, as well as awards at the Galax and Maury River festivals in Virginia, and they were featured in the top thirty acoustic artists in a 1997 “Next Generation” feature in Acoustic Guitar magazine. (info from the blueridgeheritage.com website)

Amanda Jean Kowalski is an alumni of Della Mae, the bassist in the popular all-women bluegrass group from 2009 to 2012 when she left her demanding touring schedule behind to pursue her interest in photography. She is a photographer and filmmaker who specializes in documentary style imagery and short, narrative films. In 2010 she co-founded the production company SoundLight Media with audio producer and collaborator, Samantha Broun. Her work has appeared in The New York Times, NPR.org, Oxford American, ABC News online, PRI.org, Fast Company blog, the Fretboard Journal,  TheAtlantic.com,  Strings Magazine, Maine Home+Design, Maine Magazine, Tablet.com, and others.

For more information on Amanda, visit:

After twenty plus years of playing traditional music together Patt Plunkett and Charlie Walden (aka Patt & Possum) have learned a thing or two about getting along musically. So while some couples might bicker about the bills or where to go out to eat, these two battle over chord progression and set lists.

Charlie and Patt both grew up listening to and playing traditional mid-western fiddle music. Charlie learned as a teenager at the feet of some of Missouri’s finest old time fiddlers, including Pete McMahan, Taylor McBaine and Cyril Stinnett and was encouraged by countless others. Along the way he developed an interested in Canadian fiddle tunes as the fiddling in the Ottawa Valley is similar in style and shares some common repertoire with Missouri. As such, other important influences through recordings were Graham Townsend, Don Messer and Ned Landry. He is also a big fan of Kenny Baker, Chubby Wise and Joe Meadows where Bluegrass is concerned.

Patt started out by playing piano for her grandfather, Carl Voorhees, who was a seasoned Illinois square dance fiddler. She went on to play Irish-style piano accompaniment and formed a ceili band in Chicago, which won the local Fleah Ceol twice. She is also a professional music educator and trained singer. Patt’s love of music and natural ability as a dancer led her to take an interest in square and contra dance calling and instruction along with individual clogging and step dance performance.

Charlie and Patt are active contra and square dance musicians, performing for numerous such events each year. They serve as instructors at several music camps, giving instruction on fiddle, piano styles, traditional dance and vocal music.

Patt and Possum completed their third tour of Australia in November 2013.

Fiddle tunes from Bill Katon: Bill Katon was a black fiddler from Tebbetts in Callaway County, Missouri. He gained fame as a performer over WOS Radio, broadcast from the Capitol in Jefferson City, MO, in the 1920s. Lots of the Little Dixie fiddlers Charlie learned from remembered Katon and some could play a tune or two of his, the most well-known of which is Old Jeff City, a.k.a. Katon’s Hornpipe. Charlie will demonstrate and teach this and few more obscure Mid-Missouri tunes that have been attributed to Katon. Patt will be along to provide accompaniment using the “Missouri Rules”. Instruction will by the “ear method”, but music notation and chords for the tunes will be provided the workshop.

For more information on Charlie and Patt, visit:

Shad Cobb comes from a musical family, learning fiddle and banjo from his dad at the age of 13. He moved to Nashville in 1995, and has since toured and recorded with many bluegrass and related artists and was a member of Mike Snider’s old time string band for five years. Lately he can be found playing in the Tim Obrien band as well as performing solo and duo shows with talented fiddler and vocalist Jenny Obert.
Jenny Obert is an award-winning fiddler with over 15 years experience as a touring and recording professional on stages, festivals and studios worldwide, from the Grand Ole Opry to Europe. She has performed and recorded with a wide variety of musicians, including Emmylou Harris, Bill Emerson, Billy Ray Cyrus, Dale Watson, Hazel Dickens, Roland White, and The Long Players and many others. Known for her sweet tone and innovative touch, she has worked in a diverse array of musical genres, including bluegrass, folk, old time, country and rock. Jenny also has a teaching and art studio in East Nashville, where she creates Jenny Fiddle Candles and paints, using oil, acrylic, watercolors, and inks.
For more information on Shad and Jenny, visit
MARTIN FISHER 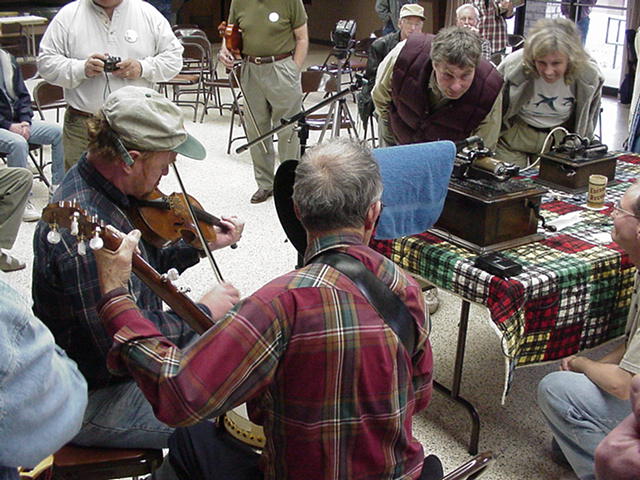 Martin Fisher comes to every Breakin’ Up Winter (and other NOTSBA events) to share his passion and expertise in old-time recording technologies. His wax-cylinder recordings are as authentic as it can get, and he’ll show you how those are made and record you in true old-time style.